Conversations with a CIO – Adapt to the local culture

“Don’t be in a hurry to condemn because he doesn’t do what you do or think as you think or as fast. There was a time when you didn’t know what you know today.”

My previous three blogs on conversations with a CIO have prompted a number of comments about CIO culture, language and location. Various readers responded with comments such as, “we are different here in Spain, France, etc.” Others commented on relationship barriers due to language and/or culture differences.  In addition, there were a variety of sweeping uninformed statements making stereotypical assumptions about differences in how European CIOs behave and make decisions – things like Southern European CIOs tend to be late to meetings and gesticulate excessively, whilst Northern European CIOs tend to speak English (over and above their native language) and are exceedingly punctual with no strict hierarchies between employees and management.  And of course the British are unique with their stiff-upper lip conservative nature, structured and methodical at all times.

How easy it is to stereotype people when you don’t bother to understand them – and worse, to act on those stereotypes.

Consequently, it occurred to me that CIOs across the globe fundamentally have two perspectives to their profession – first (and most important) a responsibility to their organisation, and second how their organisation interacts within its local geographic culture and idiosyncrasies.

Take, for instance, three key business priorities a UK CIOs might have:

Also on the CIO WaterCooler
Will giving CIOs the tools to help get the #Mid-Market back on track be the defining moment for SaaS, predictive analytics and cloud-based ERP Vendors?

Obviously a CIO in France would say:

Whilst a CIO in Italy would say:

You get the point – the words are different but their meaning is really the same – see the Russian, German, Spanish, Norwegian examples in the diagram. 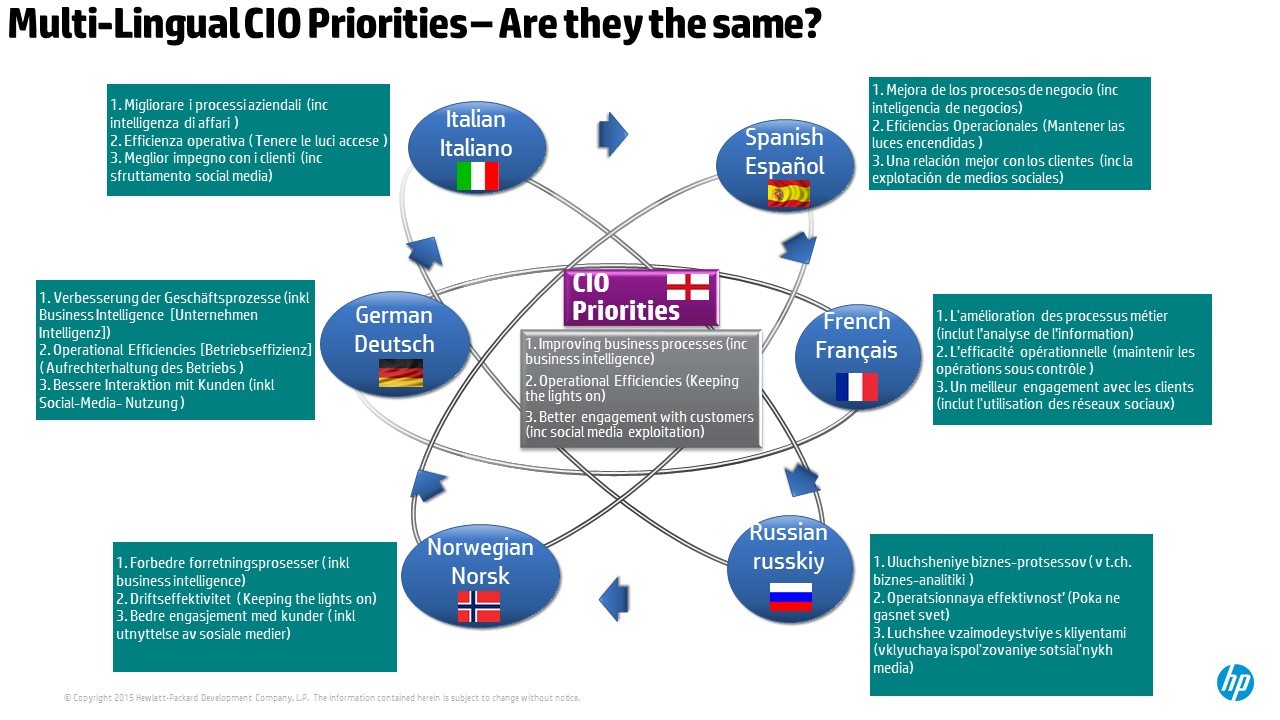 I would argue that there is no real difference in these business priorities across most organisations – the variance is purely in its execution within the culture and geographical dynamics in which the CIO lives.  At the core within corporate cultures are business leadership, enterprise strategy, management philosophy, organisational brand and reputation.  To ensure that these business priorities are achieved within their culture, the CIO needs deliver these priorities in the most effective and relevant way, being cognizant and empathic to their staff and customers, and respecting their processes and values – like any good manager would do.

Hence when talking to a CIO from Denmark, find out the style of communication with which they are comfortable, don’t assume for instance that they want to interact in English.  Then within the context of the Danes (a tolerant democratic society which tends to value an informal equilateral approach to meetings, giving everyone present the ability to participate), run your interactions to fit their needs.

Whilst in Spain for instance, the first step may be simply selecting a language.  From a business perspective they probably understand English, but are more comfortable with Spanish. But which Spanish – Basque, Castilian, Catalan, Galician, etc.?  Within this culture it is essential to build social interactions shaped upon trust, clarity, honesty and a no-nonsense approach to delivery – your word is your bond.

Also on the CIO WaterCooler
How Often Should You Revisit Your Data Governance Maturity Assessments?

Across all cultures, languages, geographies, no matter what one’s colour, race, religion, ethnicity, etc., every CIO – every person – wants to be valued and respected.  As I discuss in my previous blogs in this series, building a relationship with a CIO requires the willingness to listen and understand their business world.  Adapting your style of interaction to the culture within which you are working will assist in establishing the necessary rapport and build trust.  The arrogant touristic assumption that when visiting somewhere the locals will speak your language, understand your own cultural idiosyncrasies, want to interact with you, want your money, understand you, will not fly when dealing with a European CIO.  If you start your interaction full of stereotyped assumptions, how are you going to empathise? How are you going to gain trust? Why would the CIO want to even interact with you?

It is not always about the actual language you speak (Spanish, French, etc. although of course it can help). It is about how you understand and empathise with regional differences; ensuring that you provide business value to the CIO by understanding their business and business issues.  Knowing and understanding the different cultural aspects of business style and etiquette is essential to building personal and professional business relationships. Respecting, accepting and embracing cultural differences will make those relationships rewarding and long-lasting.