SAP ASE Total Cost of Ownership – A comparison to Oracle 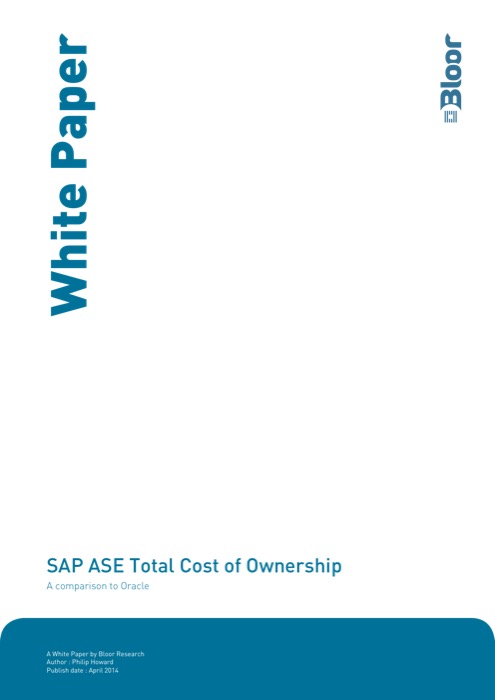 This paper analyses the results of a survey that was designed and conducted by SAP of SAP ASE (previously Sybase ASE) users. These results were shared with Bloor Research for analysis and comment. The survey was focused on total cost of ownership (TCO) of SAP ASE against a second database that the respondents were also familiar with. In particular, in this paper we look at the comparative results between SAP ASE and Oracle based on companies that had experience with both products, so that we could compare various TCO metrics between Oracle and SAP ASE.

This is the second such paper Bloor Research has produced on this basis, the previous paper having been published in 2011, less than twelve months after SAP acquired Sybase. By the time that research was published SAP ASE already supported the SAP Business Suite and SAP BW implementations but it was, nevertheless, early days for users of SAP ASE within the SAP family. We will therefore also contrast the latest results with those from 2011 where there are significant differences between the two sets of results. In particular, given the integration of Sybase into SAP, one might expect that there would have been fall off in some areas, such as support, given the inevitable disruption caused by such an acquisition. As we shall see, however, it turns out that this is not the case and, if anything, it would appear that SAP has strengthened the perception of SAP ASE.

In summary then, this paper is focused on a comparison between SAP ASE and Oracle and it will help customers to understand the potential TCO benefits of using SAP ASE as opposed to Oracle.